A fast growing cover crop, its prime usefulness being where brassica sickness is a problem due to its immunity to the disease.

Other qualities are its speed of establishment which aids weed suppression, and its use as a green manure crop. It is useful as a catch crop in northern regions if sown in July as it will be ready to provide cover within six to eight weeks, just as birds are losing cover from the cereals being combined. Due to its fast growth it is valuable as a replacement for failed crops, and will continue to provide cover right through the season. In addition, it holds its seed in pods which shed in late winter/early spring, thus providing feed during that all important ‘hungry gap’.

enquire about this item 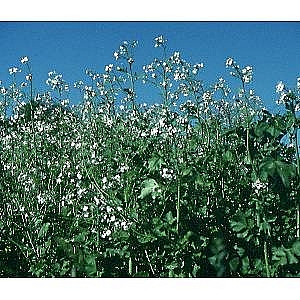